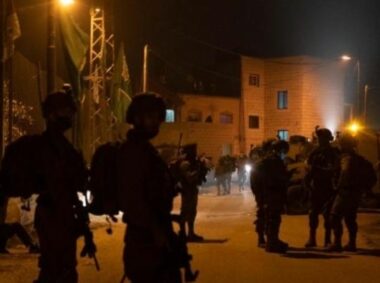 Israeli soldiers abducted, on Wednesday evening, eight young men during protests that erupted after the army invaded the at-Tour town, in the occupied Palestinian capital, Jerusalem, in addition to two others near Hebron, in southern West Bank.

Media sources said dozens of soldiers invaded the at-Tour town, stormed and ransacked many homes, leading to protests, before the soldiers fired gas bombs and concussion grenades at the protesters and surrounding property.

The two Palestinians work for Ethna Town Council, and were conducting maintenance work on the water pipeline of their community.

On Wednesday at dawn, the soldiers abducted fourteen Palestinians from several parts of the West Bank.