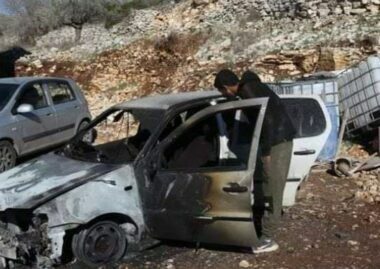 The Mayor of Turmus Ayyad, Wadea’ Abu Awwad, said the colonists infiltrated into the outskirts of the village, and torched two cars, owned by Dia’ Abdul-Majid Awwad and Awwad Ibrahim.

He added that the colonists also caused severe damage to a third car, owned by Hijazi Abdul-Qader Abu Awwad.

Since the village is under full Israeli control, Israeli police officers arrived at the scene, and confiscated the two cars, in what the locals believe an attempt to cover up the crime committed by the colonists. The police also failed to take official statements from the residents.