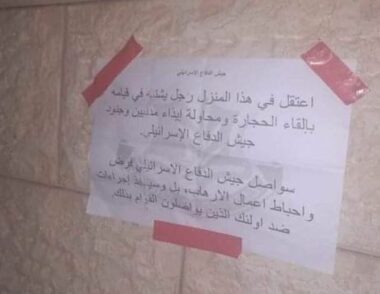 Media sources said the soldiers caused damage to many invaded homes, and abducted 14 Palestinians in the al-Mughayer village, but later released five of them.

It is worth mentioning that the soldiers posted notes on the homes of the abducted Palestinians claiming that they “hurled stones at the army, and attempted to hurt civilians. (the Israeli colonists)

The note also warns the residents that the army will continue to operate in the occupied territories, and will impose severe punitive measures against the Palestinians.