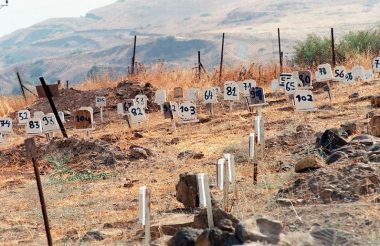 JENIN, Monday, November 22, 2021 (WAFA) – Dozens of Palestinians held a rally in the northern West Bank city of Jenin demanding the release of bodies of at least 90 Palestinians Israel has killed and has been withholding for years.

Issam Aruri, director of the Jerusalem Legal Aid Center, which spearheads efforts to get Israel to release the bodies, told the rally, which included families of some of those whose bodies are still withheld by Israel, that the Israeli occupation authorities continue to flout all international and humanitarian norms and conventions by continuing to withhold the bodies 90 Palestinians who are kept in morgues and 254 others kept in numbered graves, while 74 are still undocumented.

He said that the Minister of Justice is going to pursue this issue at the United Nations since it is considered a war crime.

The participants stressed the importance of intensifying efforts to force Israel to release the bodies to their families in order to give them a proper burial.

Israel withholds bodies of Palestinians killed by its forces in order to use them as a bargaining chip in future prisoners’ exchange deals.