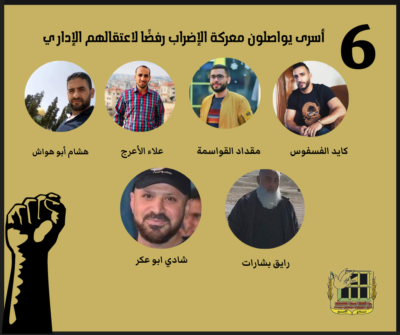 RAMALLAH, Sunday, October 10, 2021 (WAFA) – A total of six Palestinian prisoners in Israeli detention currently remain on hunger strike in protest of their unfair administrative detention without a charge or trial, according to the Detainees Affairs Commission.

The longest hunger-striker of the six prisoners is prisoner Kayed Fasfous, who has been on hunger strike for 88 days in protest of his detention without a charge or trial, followed by Muqdad Qawasmeh (81 days), Alaa Aaraj (64 days), Hesham Abu Hawwash (55 days), Rayeq Besharat (50 days), and Shadi Abu Akr (47).

Hasan Abed Rabbo, an attorney of the Commission, said the health condition of Qawasmeh has significantly deteriorated, and that he has lost 20 kg of weight as a result of the hunger strike.

He said Kayed al-Fasfous is also hospitalized in the Israeli Kaplan Medical Center due to deteriorating health conditions.

Currently, Israel is holding over 500 Palestinians in administrative detention, deemed illegal by international law, most of them former prisoners who spent years in prison for their resistance of the Israeli occupation.