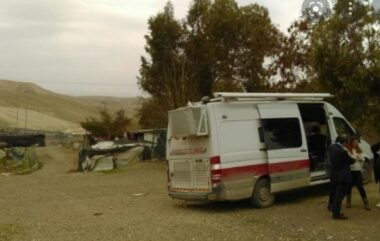 The Israeli army invaded, Sunday, the Wadi al-Maleh area in the Northern Plains of the Jordan Valley in the occupied West Bank, and delivered a demolition order targeting an under-construction building designated to be a clinic.

Daraghma stated that the Palestinians are trying to build a small clinic to serve the community Wadi al-Maleh, however, the Israeli army is refusing to permit its construction despite the difficulties the Palestinians face in the area.

The area is subject to constant Israeli violations, including the destruction of property, in addition to the ongoing construction and expansion of illegal segregated colonies in various parts of the Jordan Valley, and the military drills the army carried out in the Bedouin communities, displacing entire families, in addition to leading to dozens of casualties, including fatalities.