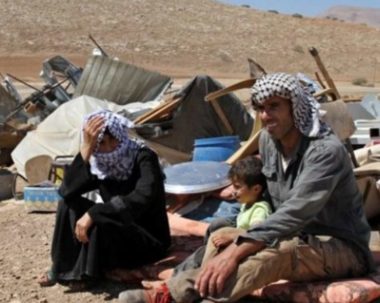 Israeli soldiers displaced, Wednesday, fifteen Palestinian Bedouin families from their homes and dwellings, in the West Bank’s Northern Plains, so that the army can conduct extensive live-fire military drills.

Palestinian Human Rights activist Aref Daraghma said the military training, which includes the use of live fire and explosives, started at seven in the morning, and added that many tanks are also part of the drills.

He stated that the training is being held in Hamsa, Wadi al-Maleh, Khirbat Samra and Masharef ar-Ras al-Ahmar.

The army also prevented the Palestinian families from entering the grazing grounds in the area.

Daraghma stated that the military trainings on Palestinian lands have been ongoing for the last fifteen years, and have led to serious property damage.

They are frequently carried out in the occupied West Bank, and the near Bedouin communities in the Negev, resulting in displacing the families in addition to the dozens of casualties, including fatalities, due to explosives dropped by the army during training.