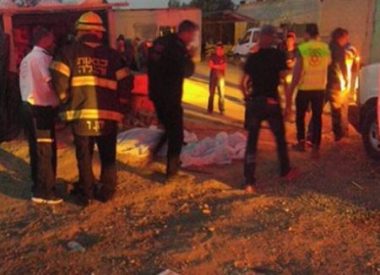 Two Palestinian children, from a Bedouin community in the Negev, were killed on Tuesday, April 25th, 2017, after an explosive object detonated near them. The unexploded ordnance had apparently been dropped by Israeli soldiers during a previous live fire training, in Zarnouk village, in the Negev.

The two children have been identified as Omar Ismael Qweider, 8, and his cousin Mohammad Mahmoud Qweider, 10.

Israeli police spokeswoman Luba Samri said the children “were apparently playing with an ordnance when its exploded,” and claimed that the police were “investigating the incident.”

Some Israeli reports tried to claim that the incident was just an accident that took place “when a power generator exploded near the children.”

Mahmoud Abu Qwaider, the father of Mohammad, told Musawa TV Channel the children were killed by an explosive object dropped by the army during a previous training in the area.

He added that the children found the object while playing near their homes, in the same area where the Israeli army constantly conducts live fire training, including the use of explosives, and the soldiers are frequently seen running and training between the houses and dwellings, carrying explosives and bombs.

After the explosion, Israeli medics, soldiers and sappers arrived at the scene, and took the children to a hospital, but they were both already dead.

“The army invades and conducts trainings in our village on a nearly daily basis; they also frequently demolish homes, tents and barns,” he said, “The Israeli army, and the police, are fully responsible for this crime – the Police are still trying to deny the truth – at first they claimed the explosion was caused by a cooking gas jar, and then they claimed it was an electricity generator that malfunctioned… they just do not want to admit responsibility.”

He added that the family will resort to the legal system to file charges against the army for using civilian areas as training grounds, and leaving these explosives and dangerous materials behind.

“We live in constant danger and fear,” Mahmoud added, “Not only do they conduct trainings using explosives and live fire in our communities, there is a railway less than two hundred meters from our homes and there are no warning signs or barriers of any kind.”

“Israel just wants to bury the whole issue, conceal the truth and hide the facts,” he said, “We lost two children, and we will sue the police and the army, at least to prevent this incident from repeating itself over and over again – they need to stop using our communities and dwellings as training grounds for the army, using live fire and explosives…”

The incident came just a few hours before Israeli officials of the so-called Bedouin Resettlement Committee, visited the village to “express their condolences to the families.

The village’s Local Council issued a statement denouncing the violation, and condemning the cruelty of such orders, especially since they came not long after the two children were killed by Israel’s own explosives, directly resulting from using civilian areas as training grounds for the military

Many Palestinians, especially children, have been killed in different areas of occupied Palestine, by unexploded ordnance, as the military frequently uses Palestinian areas, including in the Jordan Valley of the occupied West Bank, as training grounds.

Children Seriously Injured By Explosive Device Dropped By The Army

Teen Killed By An Explosive Dropped By The Army Near Tubas

Child Moderately Injured By Explosive Dropped By Army Near Hebron

Child Killed, Another Injured, When Explosive Detonated Near Them