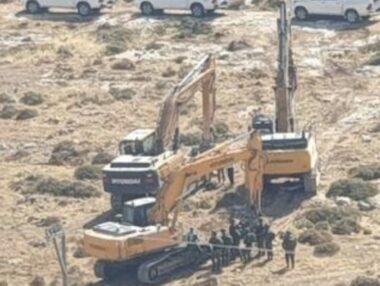 RAMALLAH, Tuesday, April 12, 2022 (WAFA) – The Israeli occupation forces today dismantled a tent used as a residence and a shed and seized agricultural equipment in the village of Beit Samia, east of Ramallah, according to local sources.

Israel claims the tent and shed were located in Area C, which makes up more than 60 percent of the area of the occupied West Bank and is under full Israeli military control where Palestinians are not allowed to build to develop.

A year ago, Israeli colonial settlers set up a new colony in the Ein Samia area which led to an altercation between the Palestinian residents and the illegal settlers with the Israeli army always interfering to suppress the Palestinians and defend the settlers.