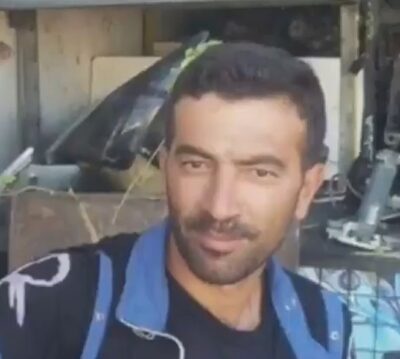 On Tuesday morning, an Israeli police officer shot and killed a Palestinian construction worker in Asqalan after the Police stormed a construction site, looking for people with no entry or work permits.

The Police said it invaded a construction site to look for Palestinian workers who have no permits and shot one who allegedly refused to show him his ID card.

The slain Palestinian has been identified as Abdullah Tayseer Mousa Srour, 41, from Hebron in the northern part of the occupied West Bank. His wife said that he was also a Jordanian citizen.

He worked in Amman, Jordan, selling car parts and fixing cars, and used to come to the West Bank to work in construction for a few months of the year for the last four years.

The family said he had no political affiliation and was a hardworking man trying to survive and support his family.

The police claim that the worker was “behaving suspiciously,” “had a knife,” and “stabbed an officer,” causing a mild injury before he was fatally shot. “Abdullah has been working hard to support his family, living in Jordan because Israel refused to grant them family reunification documents; he was an electrician and was trying to support his wife and son living in Jordan,” Sa’ad said, “This policy of killing our people, our workers, is a serious violation of International Law; “Palestinian workers are looking for their daily bread to feed their families and support them.”

On Monday night, the soldiers attacked a Palestinian worker, Mohammad al-Aqra’. 29, from Qalqilia in the northern West Bank, causing factors in the arm and the leg, before the medics rushed him to Darwish Nazzal hospital.