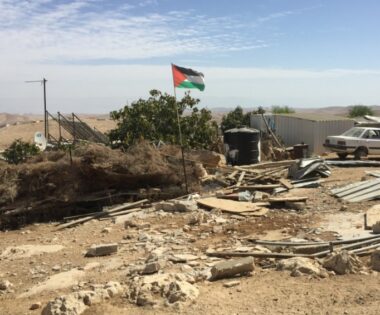 HEBRON, Saturday, October 09, 2021 (WAFA) – Extremist Israeli settlers attacked a number of Palestinian land surveyors from the Palestinian Authority’s Land and Water Settlement Commission while surveying land in Masafer Yatta community, south of the city of Hebron in the occupied West Bank, according to WAFA correspondent.

He said a group of settlers assaulted the engineers and prevented them from continuing the surveying works.

The incident is the latest in a series of attacks by Israeli settlers against Palestinian farmers and civilians across the occupied West Bank.

Meanwhile, Israeli occupation forces confiscated a Palestinian-owned bagger excavator that was working on a land reclamation project in the village of Dirat, east of Yatta town in Hebron province, said Fouad al-Emour, a local activist who monitors Israeli settlement activities in the area.

Violence and vandalism by Israeli settlers is commonplace in the occupied West Bank, and is rarely and almost never prosecuted by the occupation authorities.