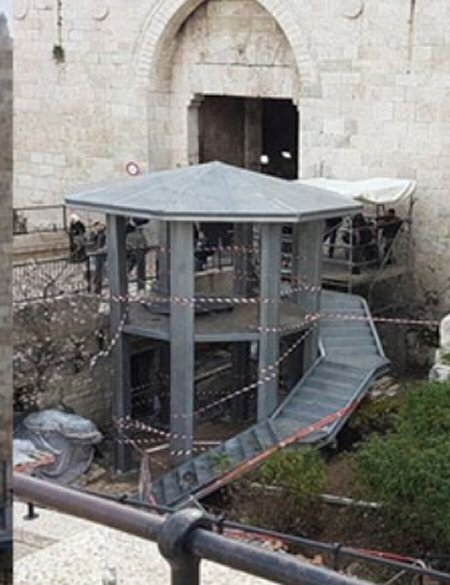 Israeli authorities have completed the construction of a watchtower checkpoint at the entrance of Damascus Gate, the main gate into the Muslim Quarter of occupied East Jerusalem’s Old City.

The watchtower checkpoint is one of three which Israel began to install last month, drawing criticism from Palestinian residents of the Old City, who say the construction watchtower is aimed at further restricting Palestinian access to the area and solidifying an already constant presence of Israeli forces in the area.

Damascus Gate was the site of several violent attacks after a wave of unrest began in October 2015, characterized largely by small-scale stabbing attacks against uniformed Israeli forces.

A number of Palestinians were also shot and killed in the area by Israeli forces, during alleged attempted attacks.

In addition to the police watch tower, surveillance cameras have been set up by Israel at almost every corner and street in and around the Old City to monitor all activity.

In June 2017, Israeli officials, including Israeli Prime Minister Benjamin Netanyahu, approved a new “security strategy” at the Damascus Gate area, after Netanyahu suggested it be turned into a “sterile area.”

Israel’s Channel 2 reported at the time that the approved security strategy will include building high, above-ground “surveillance points” in areas where Israeli forces will be stationed, “making it difficult for Palestinians to approach Israeli soldiers.”

“Certain routes will be specified for entering the Old City at the Damascus Gate, and more technological devices will be installed and used at the area to maintain Israeli police’s control and surveillance over the area.”

Israeli media and officials lauded the extensive surveillance system as being an active deterrent of “lone wolf attacks.”

However, according to Ma’an News Agency, the narrative of “lone wolf” assailants under the influence of online incitement, which has been perpetuated by the current right-wing Israeli government, has been dismissed by analysts as overly simplistic.

Palestinians have instead pointed chiefly to the frustration and despair brought on by Israel’s 50-year military occupation of the Palestinian territory and the absence of a political horizon as reasons for the outbreak of violence that started in October 2015.

02/16/18 Netanyahu Could Fall for Corruption, Not War Crimes