Weekly Procession Against The Wall And Colonies Held In Ni’lin 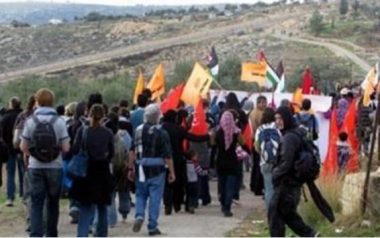 On Friday, dozens of Palestinians, accompanied by Israeli and international peace activists, held the weekly nonviolent protest against the Annexation Wall and Colonies, in Ni’lin village, west of the central West Bank city of Ramallah.

The protesters marched from the center of the village, following noon prayers, and headed towards Palestinian orchards that Israel intends to illegally confiscate, while chanting against the Wall, Colonies and the ongoing Israeli occupation of Palestine.

Mohammad Amira, a member of the Popular Committee against the Wall and Colonies in Ni’lin, said the soldiers installed a roadblock to prevent the protesters from reaching the Palestinian lands and orchards, an issue that forced them to take an alternative route, and reached the lands through Shuqba nearby town. There have been no reports of clashes or injuries.

It is worth mentioning that Ni’lin villagers have lost at least 3000 Dunams due to illegal confiscations of their lands for the construction of Israeli colonies, and the annexation wall, while the villages mainly depend on agriculture as their main source of livelihood, especially olive.