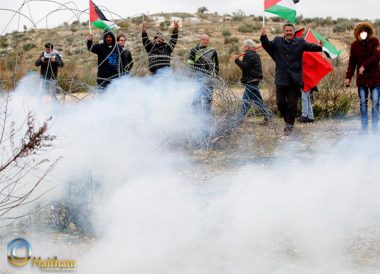 The protesters matched carrying Palestinian flags, and chanting against the ongoing Israeli occupation, and escalating violations against the Palestinian people, their lands and holy sites.

The soldiers fired gas bombs, and prevented the protesters from marching towards the isolated villagers’ orchards.

Ashraf Abu Rahma told the IMEMC that Israel is ongoing with its violations, including killings, abductions and the demolitions of homes and property, in addition to its illegal colonialist projects on Palestinian lands.

Commenting on the promotion of the officers involved in shooting him while cuffed and blindfolded, in 2008, Ashraf told the IMEMC; “this is an army of occupation, and the promotion proves the criminal nature of this army and its government.”

He also said that the Israeli occupation does not view the Palestinians and human beings, and continues to falsify the truth about what is really happening in Palestine. “This is outrageous; I want the entire world to see the truth, and see the ongoing violations and escalation carried out by Israel and its occupation army,” Ashraf, “I call on human rights groups to intervene; all what they have to do is to see the video when I was shot. Israel is claims to be a democratic state, and at the same time is burying the facts about its crimes.”

Abdullah Abu Rahma, the coordinator of the Popular Committee against the Wall and Colonies in Bil’in, denounced the promotion of the officers who shot Ashraf, and called for holding Israel accountable for its ongoing crimes and violations.

He added that the Palestinians will continue their struggle against this illegal occupation, and its colonies, until liberation and independence.