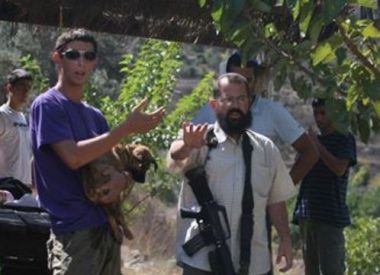 Ahmad Salah, the coordinator of the Popular Committee against the Israeli Annexation Wall and Colonies in al-Khader, said the colonists came from Boaz illegal colonialist outpost, and invaded orchards and farmland in Ein al-Qassis area, west of al-Khader.

Salah added that the colonists uprooted 300 grapevine seedlings and 100 olive saplings, and stole them before fleeing the area. The lands are owned by the sons of late Mohammad Abdul-Salam Salah.

He stated that the colonists also stole rolls of barbwires and iron bars that the Palestinians brought to fence their lands to stop the ongoing Israeli vandalism of their orchards.

The colonists also invaded an orchard belonging to Husam Mustafa Salah, and uprooting fifty olive saplings before fleeing the area with them.

Salah said the Palestinians living in Ein al-Qassis area, are subject to ongoing violations and assaults by soldiers and colonialist settlers.