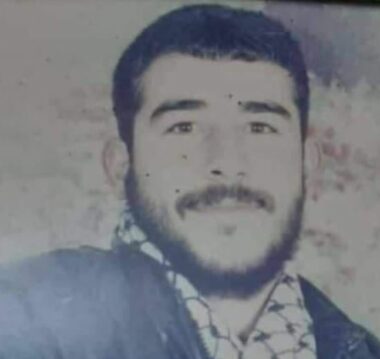 A Palestinian worker died, on Sunday morning, near the illegal Annexation Wall, in Far’un village, south of the northern West Bank city of Tulkarem, after the soldiers chased many Palestinians and fired gas bombs at them.

They added that Jouda was among several Palestinian day laborers who were trying to cross into Israel through a breach in the illegal annexation when, when the soldiers fired many gas bombs at them, and chased them.

The man suffered a fatal heart attack due to the severe effects of teargas inhalation, and extreme exhaustion, while the soldiers did not even attempt to provide him with the urgently needed first aid.

Jabr Jouda, the deceased man’s brother, said Fuad is a married father of four children and worked in hauling furniture between the two sides of the illegal wall, and added that he had a permit for entry and work in Israel; however, his permit expired a few days ago.

He also said the Palestinian medics moved the brother’s corpse to Rafidia hospital, in Nablus.

Many workers said that the soldiers fired a barrage of gas bombs at the workers, causing dozens to suffer the effects of teargas inhalation.

It is worth mentioning that dozens of Palestinians have been shot and injured, in addition to suffering the effects of teargas inhalation, over the last few months during similar Israeli violations targeting Palestinian workers near the gates of the Annexation Wall in several parts of the West Bank.