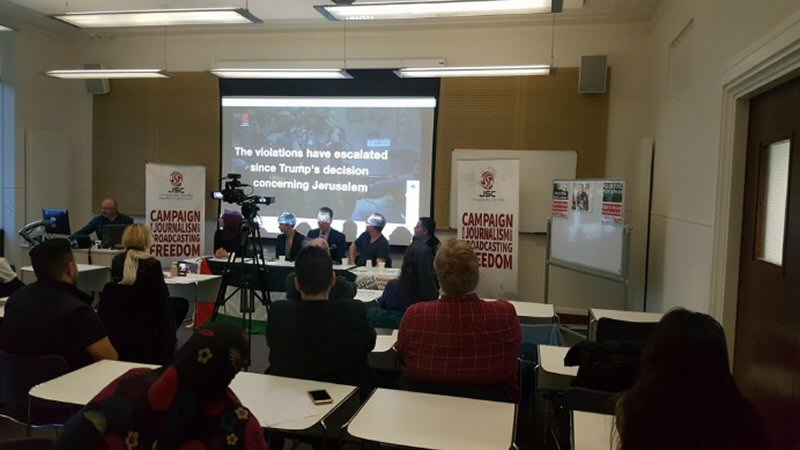 An Australian independent documentary film maker Daz Chandler said: “I was sick of not being able to use the word occupied, for example, next to the word Palestine when I was reporting to news agencies about what I was seeing in occupied Palestine. So I decided to make documentaries independently about what was happening on the ground and I wanted to be able to present them in the way that I felt was true. I did not want to compromise on what was actually going on.”

“It is a really important thing to recognize that on this occasion of World Press Freedom Day”, Chandler adds, “that in 2018 it is still very difficult for journalists who are based in occupied Palestine to report the truth because they have to then take their materials back to an editorial team that talks about something called “balance”, but it is not actually about balance at all”.

The conference talked about Palestinian journalists Ahmed Abu Hussein and Yaser Murtaja, both killed by an Israeli sniper while covering the Great Return March in besieged Gaza.

Jehan Farra, Palestinian journalist and a friend and colleague of Yaser Murtaja, said “Yaser always made us laugh whenever he comes into the office, he had such a big bright smile; he was a very vibrant person, lively and optimistic too, regardless of everything he went through. Yaser was hard working; he started a small media agency from scratch; began with him and his friend and two cameras and ended up with 15 staff members. He was a talented and ambitious young man”.

Palestinian journalist Mohammed Hassan, a SOAS University student and colleague of Ahmad Abu Hussein, said “Ahmad had a very charismatic personality. He was a hard working and courageous young journalist; his latest work on the Great Return March was outstanding, his wish was that one day he will report from Palestine 1948; after our people in Gaza achieve victory in smashing the borders”, said Mohammed, “Ahmad will continue to live in our hearts and our struggle for return and liberation”.

“The media in Britain is largely state apparatus”; said Kit Whylett from the Revolutionary Communist Group, “it is the mouthpiece of British imperialism; their entire job is to serve the British state and that is why they have been so silent and refusing to acknowledge the work of many Palestinian journalists”.

Samidoun’s statement on Palestinian journalists for the event, presented by Lara Khalidi:

In addition, Palestinian journalistic institutions like the Elia Association for Youth in Jerusalem have been targeted for closure under the orders of far-right Israeli Minister of Defense Avigdor Lieberman. Palestinian radio station Sanabel was seized by Israeli forces and five of its staff arrested and imprisoned. Palestinian television stations regularly face closure, while staff members are arrested for doing their jobs in the media.