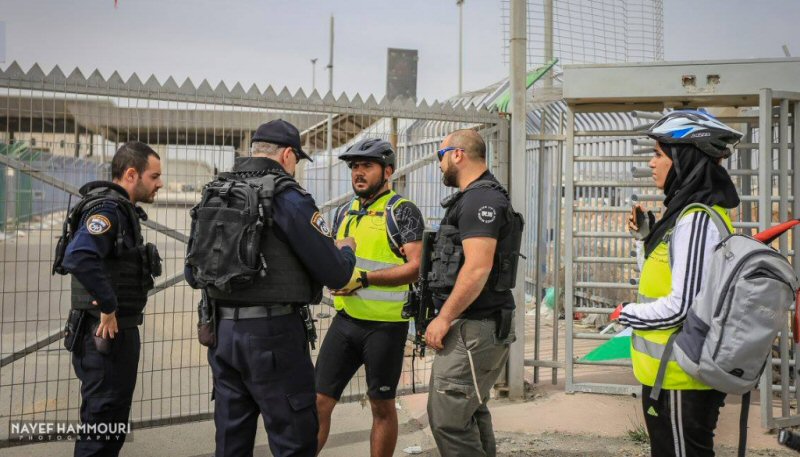 A Cycling Palestine team leader was detained by armed Israeli forces for “trespassing” during a protest ride against the Giro d’Italia cycling race.

As the Giro d’Italia got underway in Jerusalem yesterday, Israeli forces were implementing a shoot-to-kill-or-maim policy, firing tear gas and live ammunition at Palestinian protesters in Gaza, wounding hundreds, 83 from live ammunition. Thousands have been injured since March 30, many for life, including 21-year-old cyclist Alaa Al-Daly, whose leg was amputated after being shot by Israeli snipers, ending his cycling career.

Elsewhere, Israel’s secret police was busy oppressing and threatening Palestinians engaged in protesting the Giro d’Italia in the occupied Palestinian West Bank and within present-day Israel, despite race director Mauro Vegni’s assurances of no curbs on protests.

Israeli secret police made threatening phone calls to Palestinian activists in the Galilee. An activist who received a phone call has given the following testimony:

They tried to pressure us by all means to prevent the protest but our response was clear.

We are planning legal, peaceful protest activities and do not need any permission from the police for them. We shall not ask [for any permission] as long as we are not required by law to do so.

I told them: “You are not partners in our decision-making, and we are not working with you to tell you what we decide. Your direct or indirect threats will not work.”

The Israeli police will be closing down Palestinian towns along the Giro Stage 2 route for six full hours, according to a statement from the Tamra Popular Committee, a community grassroots organization from the Palestinian town in the north of Israel. Jewish towns in the same area will be closed for slightly over two hours, highlighting Israel’s racial discrimination against Palestinian citizens and what UN experts have described as its apartheid system.

The Tamra Popular Committee condemned Giro’s sports-washing of Israel’s oppression of Palestinians and asserted the its right to peaceful protest. The Giro route passes through tens of destroyed Palestinian villages and towns ethnically cleansed by Zionist militias and later the Israeli army during the 1948 Nakba.

A key slogan raised by Palestinian refugees protesting the Giro is, “Don’t trespass on our stolen land.”

In the occupied Palestinian West Bank, a group of Palestinian cyclists organized apeaceful protest ride from the city of Ramallah to Qalandia, where Israel’s sprawling military checkpoint and apartheid wall blocked their way. Heavily armed Israeli forces detained one of the team leaders of Cycling Palestine, the organizers of the protest, by for “trespassing,” despite the event taking place on occupied Palestinian land.

The day before the race start, Giro director Vegni claimed that there would be no restrictions placed on anyone and that “with regards to absolute freedom of expression, if anyone wants to protest they will do so.”

Sharaf Qutaifan of the Palestinian Campaign for the Academic and Cultural Boycott of Israel said:

To claim that somehow Israel’s well-oiled oppression machine would not be put into motion against Palestinians peacefully protesting the Giro shows just how far the race organizers will go to sports-wash Israel’s record of violent human rights abuses. Israel’s 10 million euro bribe is buying Giro’s conscious complicity at more than one level!

Has Vegni not read about the dozens of Palestinians killed and thousands wounded, many for life, by Israel’s occupation forces in Gaza in the last few weeks? Did he really think Israeli forces would not crack down on Palestinians peacefully protesting the race?

Since the race’s Israel start was announced, Giro has made one dishonest statement after another. From falsely presenting the Old City of occupied Palestinian East Jerusalem as if part of Israel, to claiming that the race would serve to “unite,” to maintaining that the race has nothing to do with politics, Giro has shown that Israel’s millions of euros in hush money was well spent.

As the race continues, in Israel and in Italy, together with supporters of our human rights, we will continue to shine a spotlight on Israel’s denial of Palestinian rights and to build our nonviolent resistance in pursuit of freedom, justice and equality.

The Palestinian Campaign for the Academic and Cultural Boycott of Israel (PACBI) was initiated in 2004 to contribute to the struggle for Palestinian freedom, justice and equality. PACBI advocates for the boycott of Israeli academic and cultural institutions, given their deep and persistent complicity in Israel’s denial of Palestinian rights as stipulated in international law. Visit PACBI at https://bdsmovement.net/pacbi and follow them on Twitter @PACBI