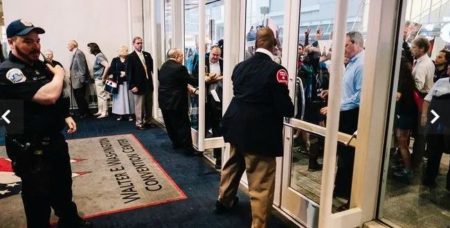 Interfaith peace activists heckled speakers, at the summit of the world’s largest Christian Zionist organization, in a protest over the Israeli occupation of Palestine.

Demonstrators were forcibly ejected from the Washington meeting by security staff after disrupting the speeches of key convention delegates, PNN reports.

More than 100 Christian, Jewish and Muslim protesters chanted slogans and waved banners inside and outside the annual conference of Christians United for Israel (CUFI), which had CUFI founder John Hagee, Israeli Prime Minister Benjamin Netanyahu, and US Vice President Mike Pence as plenary speakers.

The joint action, by faith leaders and community members, was in protest over CUFI’s support for the Israeli occupation of Palestine.

Several protesters disrupted the speeches of Hagee and Pence with Tarek Abuata, director of Friends of Sabeel North America (FOSNA), standing up and shouting, “Zionism is racism.” He was handcuffed by security officials and carried out of the convention center while calling, “People of God, wake up! Protect the Palestinian people.”

Christian and Jewish faith leaders also interrupted the US vice president’s address, chanting, “Jews and Christians say no to Zionism.” They too were dragged from the hall by conference guards.

One of them, Jonathan Brenneman, an American Palestinian activist, told Arab News that his actions were carried out in order to expose the occupation and express his views that Christian Zionists were not adhering to the true Christian faith.

FOSNA national organizer, Rochelle Watson, who also disrupted Pence, said: “We have reached a point where remaining faithful requires us to take bold action by speaking truth to power.”

Outside the summit, demonstrators blocked one entrance to the conference center, and later an intersection. They prayed, sang, and read out the names of Palestinian children they claimed had been killed or injured as a result of Israeli policies, while holding up posters that read, “Reclaim Our Theology” and “Thou Shall Not Kill.”

The coalition of faith groups included the FOSNA, Jewish Voice for Peace (JVP), American Muslims for Palestine (AMP), and the US Campaign for Palestinian Rights (USCPR).

Jonathan Brenneman, a Palestinian-American Christian with the Mennonite Church, said: “I’m here in sacred witness for Mohammed, a 14-year-old Palestinian boy, whose leg was amputated after he was shot by Israeli soldiers.”

Another protester with Queers Against Israeli Apartheid, in New York, said: “I’m here because I have been struggling against the messaging that ‘all Jews support Israel.’ We just need to resist in a holistic way against the forces of empire that are using religion to do this work.”

Abuata said of the action: “We are here to bear sacred witness and hold CUFI accountable to a theology of love.”