Wounded Child Remains In A Coma In A Serious Condition 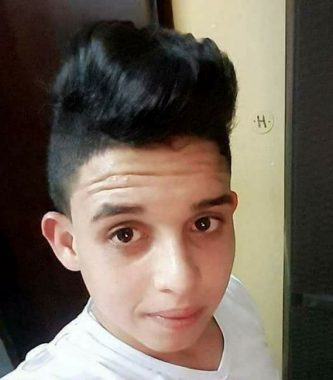 The Palestinian Prisoners’ Society (PPS) has reported, Saturday, that a wounded child, remains in a coma, in a life-threatening condition at an Israeli hospital, after Israeli soldiers shot him with live rounds in the face.

The PPS said the child, Hamed Omar al-Masri, 14, is currently at the Intensive Care Unit, in the Israeli Schneider Children’s Medical Center in Petah Tikva, after undergoing a surgery in his face, and that his health condition remains life-threatening.

It added that the child has three more surgeries scheduled in the coming period, due to the seriousness of his wounds, especially since the Israeli army bullets struck him in his left eye, and nose.

It is worth mentioning that the child was shot by the soldiers on December 12th, near Salfit, in northeastern West Bank.