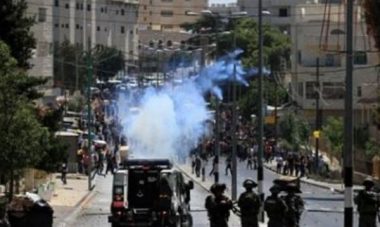 Israeli soldiers attacked, Saturday, a nonviolent procession in Bethlehem, assaulted many reporters and tried to prevent them from documenting the unfolding events.

The soldiers started firing gas bombs and concussion grenades at the marchers, and attacked many reporters, in an attempt to prevent them from doing their jobs.

The procession is part of ongoing activities and massive popular protests denouncing Donald Trump’s illegal recognition of occupied Jerusalem as the capital of Israel, and his preparation to move the American Consulate from Tel Aviv to the occupied city.

It also commemorates the fiftieth anniversary of the establishment of the leftist Popular Front for the Liberation of Palestine (PFLP).

It is worth mentioning that the soldiers have abducted hundreds of Palestinians, injured thousands, and killed eleven Palestinians, since Trump made his illegal announcement, in direct violation of International Law and all related United Nations and Security Council resolutions, in addition to one child who died from serious wounds he suffered in 2014.

On Friday, the soldiers killed four Palestinians in the West Bank and the Gaza Strip, and injured at least 367.

On December 12, 2017, the soldiers killed three Palestinians identified as Mustafa al-Sultan, 29, from Beit Lahia, in the northern Gaza Strip, and Hussein Nasrallah, 25, from al-Karama neighborhood, northwest of Gaza city.

One woman, identified as  Hamda Zubeidat, 60, from Zubeidat, north of Jericho, died of a heart attack, on December 12, when Israeli soldiers hurled concussion grenades near her, just as she opened her door.

On December 9, the soldiers killed Mohammad as-Safadi, 25, from ad-Daraj neighborhood, in Gaza city, and Mahmoud at-‘Atal, 29, from Sheikh  Radwan area in Gaza city, after the army fired missiles at them.

On December 8, the soldiers killed Maher Atallah, 54, from Beit Hanoun, in the northern part of the Gaza Strip.

On December 7, the soldiers killed, Mahmoud al-Masri, 30, from Khan Younis, in the southern part of the Gaza Strip.

It is worth mentioning that, on December 6, 2017, a Palestinian child, identified as Mohammad Saleh Abu Haddaf, 4, died from serious wounds he suffered on August 8, 2014, when Israeli army drones fired missiles at his family’s home, and several nearby homes, in al-Qarara town, north of Khan Younis, in the southern part of the Gaza Strip.