Wounded Palestinian Remains In Serious Condition At An Israeli Hospital 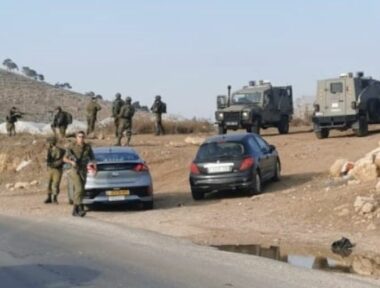 The Palestinian Detainee’s Committee has reported, Monday, that a wounded Palestinian, who was shot by the soldiers on Sunday, remains in critical condition, on life support, at Soroka Israeli medical center.

The Committee stated that the Palestinian, Ali Amro, from the southern West Bank city of Hebron, underwent surgery at the Israeli medical center, and remains sedated and hooked to a ventilator, in critical condition.

It is worth mentioning that Amri was shot by the Israeli soldiers, Sunday, at the entrance of the al-Fawwar refugee camp, south of Hebron, after the army claimed he “attempted a stabbing attack” targeting the soldiers.

A court hearing will be held this coming Thursday at the Ofar military court, near the central West Bank city of Ramallah, as the army is asking for a remand so that Amro can be interrogated later.

It is worth mentioning that Amro is a teacher, who has been working at Majed Abu Sharar School, in Doura town, west of Hebron, for the past fifteen years.