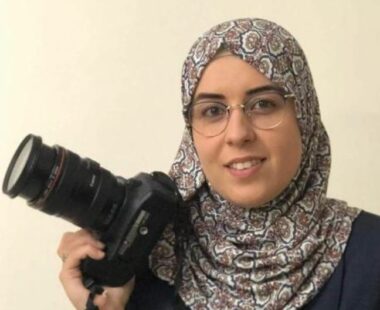 The Palestinian Prisoners’ Society (PPS) has confirmed that Israeli soldiers abducted, on Monday at dawn and morning hours, at least fourteen Palestinians, including siblings, a female journalist, and former political prisoners, in several parts of the occupied West Bank.

In the central West Bank governorate of Ramallah, the soldiers abducted a journalist, who is also a former political prisoner, identified as Bushra Tawil, from the al-Biereh city, after stopping her at a sudden military roadblock near Nablus, in northern West Bank, before moving her to Huwwara military base, south of Nablus.

The soldiers also invaded the al-Jalazoun refugee camp, in addition to Doura al-Qare’ town, north of Ramallah, and used a military surveillance drone while conducting searches.

In Hebron, in southern West Bank, the soldiers abducted two siblings, identified as Mos’ab, 28, and Salah Nidal Zghayyar, 29, after storming their homes and ransacking them in the Schools Street area in the city.

The family said the soldiers conducted very violent searches, leading to property damage, and added that Salah is a former political prisoner who was only released from Israeli prison two months ago, after spending fifteen months in captivity.

In addition, the soldiers abducted Moayyad Walid Amro, 28, and Mohammad Yousef Shahin, 27, from their homes in Doura town, southwest of Hebron.

The soldiers also installed roadblocks at the entrances of Sa’ir and Halhoul towns, in addition to Hebron’s northern road, in Jouret Bahlas area, and Hebron’s southern road, in the al-Fahs area, before stopping and searching dozens of cars, and interrogated scores of Palestinians while inspecting their ID cards.

In Bethlehem, south of occupied Jerusalem, the soldiers abducted Mohammad Hamdi Masa’id, from his home in Aida refugee camp, in the northern part of the city.

The soldiers also abducted Fateh Movement’s secretary in Beit Ta’mar area, east of Bethlehem, Morad Mohammad Abu Moheimeed, 38, in addition to Mohammad Hashem Abu Moheimeed, 42, after confiscating his car, along with three siblings, identified as Salah, 29, Fuad, 28, and Mo’taz Jom’a Abu Moheimeed, 25, after storming their homes and ransacking them.

In Tulkarem, in northern West Bank, the soldier abducted Emad Fahmi Ammar, from his home in Qaffin town, north of the city.

Protests took place in the town after the soldiers invaded it; the army fired many gas bombs, concussion grenades and rubber-coated steel bullets.

In Tubas, in northeastern West Bank, the soldiers abducted a former political prisoner, identified as Bashir Eyad Abdul-Razeq, in addition to Mustafa Shahrouri, while crossing the al-Hamra military roadblock, in Northern Plains.

In addition, the soldiers invaded Yaffa Street area and the areas surrounding the al-‘Ein refugee camp, west of Nablus, before storming a shop owned by a political prisoner, and confiscated its belongings.

In Qalqilia, in northern West Bank, the soldiers invaded Jayyous town, northeast of the city, and fired many gas bombs near the annexation wall.

In occupied Jerusalem, the soldiers invaded the home of Marwan al-Ghoul, the head of Silwan Club, and summoned him for interrogation.

On Sunday evening, the soldiers abducted a young man after he reportedly breached the perimeter fence, in the southern part of the Gaza Strip.