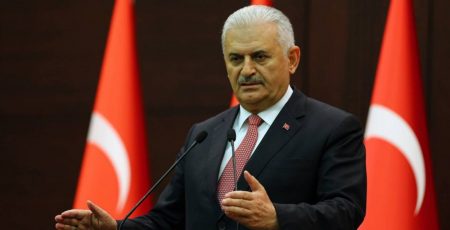 Turkish Prime Minister Ali Yildirim vowed, Wednesday, in a telephone call to the Head of the Political Bureau of the Islamic Resistance Movement of Hamas, Ismail Haniyeh, that Turkey is working on finding a solution for the ongoing electricity crisis in the Gaza Strip.

A statement issued by Hamas explained that Yildirim discussed, with Haniyeh, the electricity crisis in Gaza, and promised to find solutions for it, pointing to a Turkish grant to pay for fuel to power the plant.

The electricity crisis, according to Al Ray, has been aggravated since the end of the Qatari and Turkish fuel grant,last April , coinciding with the imposition of fees for buying such fuel.

Yildrim praised the new “General Principles & Policies” document, issued recently by Hamas, and considered it an opportunity to bring Hamas and Fateh together.

Turkish President Recep Tayyip Erdogan said that the document is an important step both for the Palestinian cause and for realizing consensus between the Hamas and Fateh.

Yildrim said that his country pursues the settlement and Jerusalem issue closely in different levels , hoping that peace and stability overcome in Palestine.

For his part, Haniyeh expressed his gratitude for the telephone call, and wished Turkey well on the Ramadan holy month, stressing that the relation between Hamas and Turkey is strong.

Qatar and Turkey are considered great allies of Hamas, along with a number of countries, organizations and movements around the world.

Haniyeh brought the Turkish prime minister up to date on the recent developments regarding settlements and Israeli measures in occupied Jerusalem, including the Israeli occupation government meeting in a tunnel under Buraq wall, in a precedent the first of its kind since 1967.