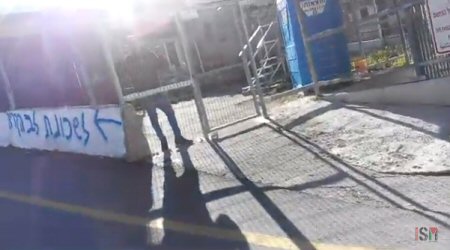 This teenager was abducted, yesterday, after he and his little brother were attacked by Israeli police and an illegal settler, in the streets of Hebron (Al Khalil}.

His testimony is as follows: ”This morning, my sister came to me and told me that the army kidnapped my younger brother. When I went there, to see what’s going on, I found them beating him up. I tried to protect him, but the army pushed me away to a corner. While I was in that corner, a settler tried to run me over with his car. I escaped. Then, he came out of his car and beat me up. Then the army came and beat me up and held me from here (chin). He took my ID and my phone and detained me, here. Don’t know what to do. Every few days I get arrested. I have a suspended sentence for 10 months, against me, and, if he calls the court, now, I will probably have to pay 10.000 shekels. Where will I get them this money, then?! I work the whole day for 50 shekels. Not long ago, I was arrested for two months, because I was beaten up by a settler, and there a video of that incident where they were attacking me.”