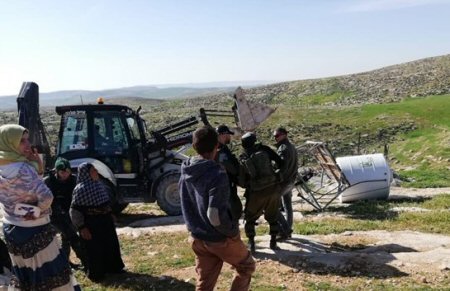 Israeli forces demolished two Palestinian homes on Wednesday, at noon, in the South Hebron Hills of the occupied West Bank city of Hebron.

Israeli authorities seek to displace Masafer Yatta residents, in order to seize their lands, as part of an Israeli settlement expansion plan in the West Bank.

Around 3,000 Israeli settlers live in illegal Jewish-only settlements in the Yatta region, according to the Applied Research Institute – Jerusalem (ARIJ).

Masafer Yatta residents were expelled at the time of the establishment of a firing zone in the 1970s and were eventually allowed back following a long court battle, but are under the constant threat of being expelled or seeing their homes demolished.