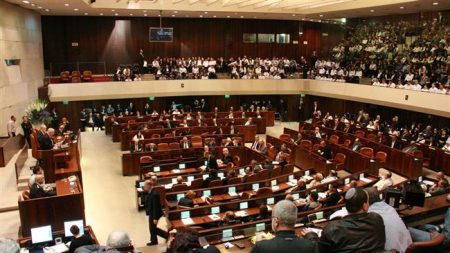 Likud Knesset Speaker Reuven Rivlin suggested that Israeli Prime Minister Ariel Sharon and Finance Minister Benjamin Netanyahu must run together in the next elections to prevent a split in the Likud.

‘The two must agree to run together as Nos. 1 and 2 with a rotation in the middle of the term – so that each one serves two years as prime minister – or some other way, as both of them support the disengagement plan.’ he said.

Rivlin raised this idea recently in separate talks with Sharon and Netanyahu, both refused to comment.

Yet A Netanyahu supporter said Sunday that if the idea is turned into an official proposal, Netanyahu would consider it favorably. :

Sources close to both men believe that the mutual lack of trust between them stands as a difficult to overcome obstacle.

Netanyahu failed Sharon twice, first in the Likud referendum over disengagement, and second in the latest Likud central committee meeting over LaborÃ¢â‚¬â„¢s joining the cabinet. In both Netanyahu stood short of providing Sharon with public support, and consequently, Sharon received a humiliating defeat.

Sharon aids believe that even when Netanyahu sat on the wall watching, his Likud loyals played an active rule in the efforts that led to the Prime MinisterÃ¢â‚¬â„¢s double defeat.

Netanyahu knows for sure that he stands no chance to face the most popular prime minister in the history of Israel, and Sharon learned the hard way that Likud party institutes are more loyal to Netanyahu than to their party leader and prime minister.