1600 Israeli Settlement Units to be Built in Occupied Golan 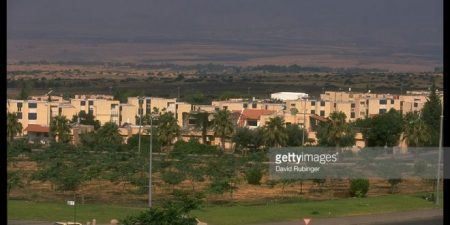 According to the PNN, it was built over the destroyed Syrian villages of Qasrin, Shqef and Sanawber, whose inhabitants were either forced to leave their homes by the Israeli army or were displaced by fighting, at the time of the Israeli occupation in 1967. Once the hostilities came to an end, the native inhabitants of these villages were forbidden from returning.

Israel began to establish settlements in occupied Golan within a month of the occupation. Today, there are approximately 23,000 Israeli settlers in the area, living in over 34 illegal settlements. The construction and expansion of Israeli settlements in the occupied Syrian Golan is illegal, under international law, and has been repeatedly condemned by the international community. Nonetheless, the Israeli government continues its policy of settlement expansion — indeed, only last year, the Israeli government announced plans for 100,000 new settlers to relocate to the region over the next five years.

Meanwhile, due to discriminatory land, housing and development policies, Syrian residential areas are severely overcrowded. As a result of severe restrictions imposed by Israeli planning committees, it is close to impossible for the native Syrian population, in the remaining Syrian villages of the Golan, to obtain building permits. Therefore, the people are forced to build homes without building permits, as this is the only way to meet their housing needs. Consequently, Syrian home owners run the risk that their home could be destroyed: as was the case with Mr. Bassam Ibrahim, whose home in the Syrian village of Majdal Shams was demolished by Israeli authorities last month. Currently, the Syrian owners of between 80 – 90 houses have been notified that their homes are also due to be demolished.

Al-Marsad, an independent, not-for-profit, legal human rights organisation – and the only human rights organization operating in the occupied Syrian Golan, had strongly condemned the plans, and called on the Israeli government to abide by its obligations under international law, stop all illegal settlement expansion, and end discriminatory housing and development policies targeting the native Syrian population in the occupied Syrian Golan.

In addition, Al-Marsad called on the international community to strongly condemn plans for the illegal construction, and act to ensure that Israel abides by its obligations under international law.