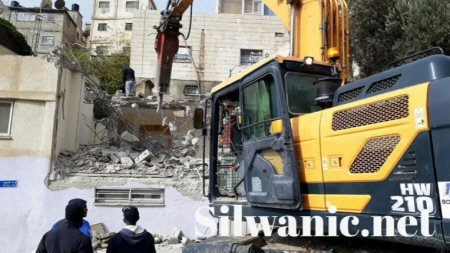 Israeli authorities have demolished a total of 169 structures in East Jerusalem this year – a 20 percent increase compared to 2017.

This month, Israeli authorities have demolished or demanded that Palestinians demolish a total of seven Palestinian-owned structures in occupied Jerusalem.

According to the United Nations Office for the Coordination of Humanitarian Affairs in the occupied Palestinian Territories, Israeli authorities have demolished a total of 169 structures in East Jerusalem this year as of December 3, which represents a 20 percent increase in such demolitions compared to 2017.

On Monday, December 3, 2018, Ahmad Siam demolished his stockroom and garage in the neighborhood of Silwan in East Jerusalem, reports the Wadi Hilweh Information Center. Israeli authorities provided Siam with an order demanding that he demolish the structures within 48 hours or else face high fines. Israeli authorities claim the structures lack Israeli construction permits.

Israeli forces demolished a Palestinian-owned home in the Jabal al-Mukaber that housed 12 people. Jerusalem-based activist Rasim Obaidat told the Alternative Information Center, “during the demolition of the home the village was transformed into a military compound. Dozens of police and soldiers closed all entrances to the village, stopped cars and checked the IDs of passengers.” The police also prevented Palestinian journalists from covering the event and forced students at a nearby school to stay inside until the demolition was complete. The process took two hours.

The Wadi Hilweh Information Center reports that the Israeli municipality demolished the home under the pretext that it lacks Israeli construction permits.

In Sur Baher that day, Israeli forces demolished two stores. Mohammed Abu Tair, the owner of the stores, said he had no warning of an impending demolition. Israeli authorities allege the stores lack Israeli construction permits.

Only days later, on Saturday, December 8, 2018, a Palestinian family demolished their own home in Silwan to avoid paying high fees to the Israeli municipality of Jerusalem. According to the Wadi Hilweh Information Center, 14 members of the Hashimeh family lived in the home, including seven children. The house belonged to the family for 20 years. Israeli authorities ordered the house demolished by December 10 citing a lack of Israeli construction permits, the Palestinian News and Info Agency reports.