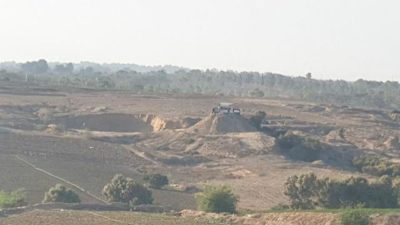 Four Palestinians were shot and killed by Israeli forces for allegedly coming too close to the border fence between Gaza and Israel, east of Dir al-Balah, in the central Gaza Strip, according to Israeli media sources.

Israeli forces stationed along Gaza borders to the east of Khan Younis reportedly opened fire on a group of Palestinians after they allegedly approached the Israeli-installed barbed-wire fence along Gaza’s border with Israel, shooting and killing four.

The identities of the Palestinians remain unknown, especially since the army took their corpses away.

However, a Facebook page managed by the family of one of the slain Palestinians said the four have been identified as Ahmad Ayman Tarabin, Abdullah Ismael Hamayda, Abdullah Ashraf al-Ghamri and Rashad al-Bodeini.

Israeli sources claimed that the group of Palestinians had fired toward the military base at the border, and there was an exchange of fire.

It also said the Palestinians carried AK-47 rifles, hand grenades, and a rocket-propelled grenade launcher, in addition to food.

Israeli daily Haaretz said the army is trying to determine whether the Palestinians “were planning to attack soldiers or civilians.”

The Israeli Ynetnews said that the Golani Brigades that opened fire on the Palestinians are the same Brigade that came under fire two days ago, when two soldiers were injured.

Following the shooting of the four Palestinians, the Israeli airforce dropped bombs on what they claimed were two observation posts for the Al-Qassam Brigades, the armed wing of the Hamas party.

Israel has imposed a buffer zone inside the Gaza Strip along the border between Gaza and Israel, preventing Palestinians from reaching their lands near the border fence. It regularly opens fire at anyone who enters that buffer zone.

In a fact sheet about Israeli attacks on border areas and their consequences, the Palestinian Center for Human Rights (PCHR) said, “preventing Palestinians from accessing their lands and fishing areas violates numerous provisions of international human rights law, including the right to work, the right to an adequate standard of living, and the right to the highest attainable standard of health.”