Soldiers Abduct Four Palestinians, Including A Woman, In Hebron 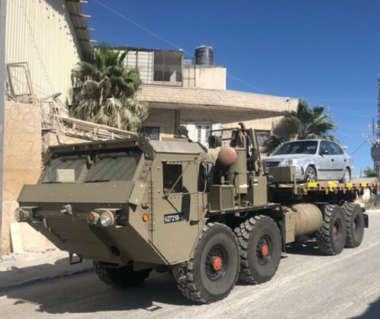 Israeli soldiers abducted, Saturday, four Palestinians, including one woman, near Hebron, in the southern part of the occupied West Bank, reportedly for their involvement in the killing of an Israeli soldier two days ago.

Media sources said the soldiers continued the extensive and violent searches of homes and property in various areas in and around Hebron.

They added that the soldiers abducted Qassem Aref Khalil Asafra, his wife Enas Nabil Asafra, in addition to Ekrima Asafra and Nasr Asafra, and took them to an interrogation facility. All are from Beit Kahil town, northwest of Hebron.

The soldiers also confiscated a car, owned by one of the abducted Palestinians, and towed it to their base in Etzion.

The army claimed the abducted Palestinians are reportedly involved in the fatal shooting which led to the death of an Israeli soldier, identified as Corporal Dvir Sorek, who was a settler living illegally on stolen Palestinian land in the settlement of Ofra, and was killed Thursday.

Also Saturday, Israeli soldiers killed four Palestinians for allegedly coming too close to the border fence between Gaza and Israel, east of Dir al-Balah, in the central Gaza Strip, according to Israeli media sources.