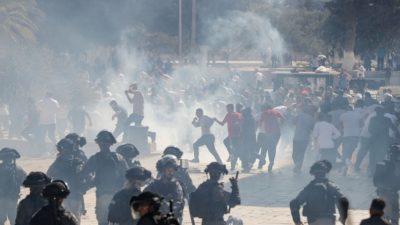 While tens of thousands of Muslim worshipers were praying in the al-Aqsa Mosque in Jerusalem Sunday for Eid al-Adha, one of the most sacred holidays in the Muslim year, Israeli forces attacked the mosque, forcing the worshipers to flee in panic.

The Israeli forces were accompanied by a large group of right-wing Israeli Jewish settlers, many of whom are part of an ideological network whose express aim is to destroy the mosque and replace it with a Jewish temple.

Hanan Ashrawi, member of the Executive Committee of the Palestine Liberation Organization, told the Palestinian Wafa News Agency, “The storming of Al Aqsa Mosque Compound in Jerusalem by Israeli occupation forces this Eid morning is an act of recklessness and aggression, designed to provoke religious and political tensions in the City and across Palestine”.

“We condemn this aggression, which is reprehensible and dangerous and hold the Israeli political establishment fully responsible for its grave consequences,” she said in a statement.

“To score points in election season, Israeli politicians are competing on who can exhibit higher levels of aggression and hostility against the Palestinian people during this important religious holiday, including the endorsement of Israeli settler plans to storm Al Aqsa Compound.

“These Israeli attacks and political endorsements of extremism are stoking the flames of religious fervor and threaten to plunge the region in sectarian war. They reflect a dangerous and irresponsible agenda that must be confronted with blanket and unequivocal international condemnation”.

Ashrawi said the international community must “confront this belligerence and intervene to stop any further deterioration in Jerusalem.”

The President of the Palestinian Authority, Mahmoud Abbas, also condemned the Israeli provocation, saying in a statement, “President Abbas salutes our people in Jerusalem for their steadfastness in the face of the occupation schemes that seek to change the status quo at Al-Aqsa Mosque as an only Muslim holy place, calling for urgent international and Arab intervention in order to curb the aggression and Israeli arrogance and force Israel as an occupying power to stop its actions and practices in Jerusalem and Al-Aqsa.

“We warn the Israeli government against continuing to allow settlers to carry out these crimes and we warn against turning the political conflict into a religious one that could burn everything in its way”.