385 Dunams of Palestinian Land to Be Seized By Israeli Authorities 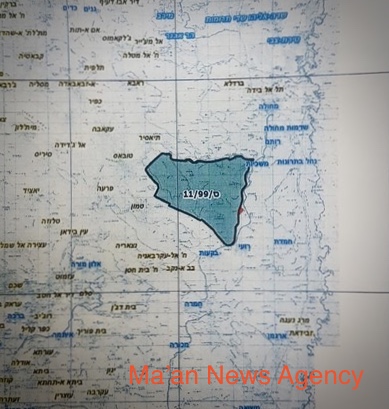 Northern Jordan Valley residents Tuesday received notice from the so-called Israeli Civil Administration, that their agricultural land will be seized by Israeli authorities, according to Maan News Agency.

Local settlement monitor Mutaz Bisharat told Maan the Palestinians of the city of Tubas, northeast of Nablus city, in the Jordan Valley/Tubas district, as well as the towns of Tayasir and Tamoun were informed of Israel’s intent to dispossess them of 385 dunams (95 acres) of their land.

The land, Bisharat said, will be allocated for the construction of new roads for Israeli settlers to travel through the occupied territories. He also observed that the planned roads would be built only meters away from the Palestinian elementary school in Tayasir.

All Israeli settlements are considered illegal under international law, as stated in Article 49 of the 4th Geneva Convention, the occupying force, Israel, is forbidden to transfer its own population onto the land which it occupies.

Approximately 550, 000 Israeli settlers live in the occupied West Bank, in direct violation of the 4th Geneva Convention, while indigenous Palestinians are displaced.