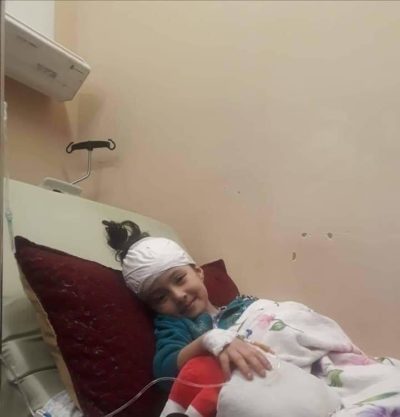 A 5-year old Palestinian child from Gaza who was finally allowed permission to travel to Jerusalem for a complicated brain surgery was forced to travel alone when Israeli authorities denied her parents permission to accompany her. ٍShe suffered from a brain tumor and died soon after the surgery.

According to the Palestinian Minister of Health Mai Alkaila, Aisha Lulu, 5 years old, from al-Bureij refugee camp in central Gaza, died after returning to Gaza from surgery in Jerusalem, and a harrowing journey through numerous Israeli checkpoints that she had to endure alone.

Alkaila stated, “How can a little child travel alone through Israeli checkpoints without being escorted by her mother, father or brother to provide her with affection and psychological support during treatment?”

According to the Palestinian Wafa News Agency, none of Lulu’s family members were allowed by Israel to be on her side in hospital as applications by her family members to accompany her to Jerusalem for her complicated brain surgery were denied.

She had to travel with a woman, who wasn’t her mother or even related to her, and was allowed by Israel to accompany her.

In a press statement, Alkaila added, “Aisha had to fight her disease alone, in a blatant disregard to international agreements, covenants and treaties on human rights, children’s rights, the right to health and access to health services in a safe manner,.”

According to Wafa, Aisha suffered psychologically throughout the entire ordeal, and was seen crying and calling for her mother loudly to be beside her in the hospital.

Alkaila called on the international community to intervene, and to demand that Israel allow parents to accompany Palestinian children who are forced to leave the Gaza Strip for surgery.

Due to the Israeli siege imposed on Gaza since 2007, hundreds of Palestinian patients have died from being denied proper medical treatment. The hospitals in Gaza remain severely under-equipped, and sick Palestinians must travel to Israel or abroad because of the lack of treatment inside Gaza.

According to Wafa, last month, the World Health Organization said out of 2,004 patient applications submitted in March for an Israeli permit to cross Erez crossing between Gaza and Israel for health care outside the besieged Gaza Strip, only 1,293 (65%) of the total were approved, and 74 patient applications were denied permission, including four children under the age of 18 years.