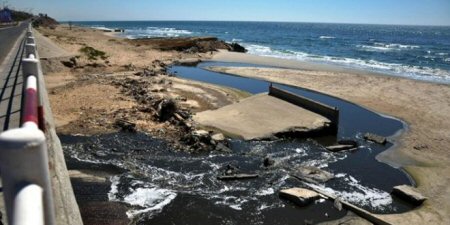 Palestinians in the Gaza Strip can no longer enjoy clean water and air on the territory’s beaches due to high rates of pollution, the local Environment Quality Authority (EQA) reported, this week.

PNN reports that, according to the report, 50 per cent of Gaza’s beaches are unfit for recreational purposes due to untreated sewage and waste water being pumped into the sea. An official study showed that they actually pose a serious risk to health and safety.

The sewage treatment works in Gaza have been targeted by Israel on a number of occasions and the Israeli-led blockade prevents spare parts from being obtained to carry out essential repairs. Furthermore, the daily power cuts and fuel shortages mean that what little equipment is working cannot do so adequately.

The Gaza coast on the Mediterranean Sea is the only recreation area available for most Palestinians in the enclave during the summer. It is about 40 km-long, and there are nine major sewage outlets pumping some 1.1 million litres of raw waste into the sea every day.

This is having a major effect on the cleanliness of the Mediterranean Sea, warn local officials and experts.