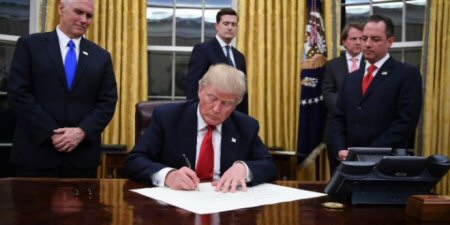 U.S. President Donald Trump has signed an order delaying the relocation of the U.S. Embassy in Israel from Tel Aviv to Jerusalem, breaking his election promise, several reports said, according White House  statement.

In doing so, Trump continues the policy of the previous three presidents and breaks an election promise he made to move the embassy to Jerusalem, the second president to break such a promise, after George W. Bush.

The waiver has been signed by every U.S. president since 1995, and it is valid for six months at a time. Former U.S. President Barack Obama signed it during the last weeks of his term, and, on Thursday, it would be half a year since he did so.

The White House said Thursday, that while Trump signed the waiver, he has no intention in breaking his campaign promise.

“No one should consider this step to be in any way a retreat from the President’s strong support for Israel and for the United States-Israel alliance,” the  said in a statement.

The White House added : ”President Trump made this decision to maximize the chances of successfully negotiating a deal between Israel and the Palestinians, fulfilling his solemn obligation to defend America’s national security interests. But, as he has repeatedly stated his intention to move the embassy, the question is not if that move happens, but only when.”

PNN reports that, according Haaretz Israeli daily, Israeli  Prime Minister Benjamin Netanyahu asked Trump not to sign the presidential order freezing the moving of the embassy from Tel Aviv to Jerusalem, a week and a half ago during their meeting in Jerusalem.

According to a senior Israeli official, Netanyahu told Trump that Israel was interested in having the embassy moved and that he did not think that this would cause a deterioration in the security situation in the West Bank.