54 Palestinian Children Killed, Over 900 Detained Since 2018 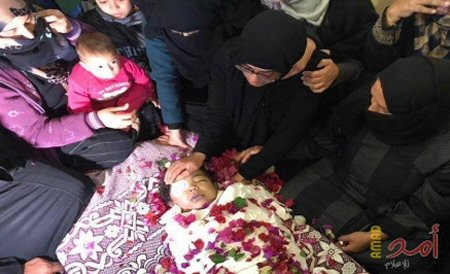 The PLO’s Abdullah Hourani Center for Studies and Documentation has reported that 54 Palestinian children have been killed by Israeli forces since the beginning of this year.

Hourani Center mentioned, in a report about the blatant violations against Palestinian minors, that 44 of them were killed during the Great March of Return, along the borders of the Gaza Strip, while another three are still being detained in Israeli prisons.

The center affirmed, according to Al Ray Palestinian Media Agency, that these children posed no danger to the Israeli military; however, the soldiers deliberately targeted them with live-fire, and with the intent to kill.

In the same context, Hourani Center reported that Israel detained more than 900 Palestinian children in the West Bank and Jerusalem, and about 230 are still being detained under harsh, inhumane circumstances.

The report also mentioned that Israeli forces continue with systematic violations against Palestinian children with no regard for the humanitarian or psychological aspects of their actions. For instance, the military court of Ofer recently sentenced Ayham Sabbah, age 17, to 35 years in prison, for an alleged stabbing operation in 2016, when he was 14 years old.

Defense for Children International – Palestine (DCIP) stated that Israel aims at converting Palestinian minors into children with disabilities by deliberately targeting them with live and explosive bullets.

DCIP indicated several cases, in the Gaza Strip, of children suffering permanent disabilities, during their participation in the Great Return of March, due to direct targeting by Israeli forces.

DCIP further underlined that these practices are considered as flagrant violations of International Humanitarian law (IHL), the Fourth Geneva Convention, and the Convention on the Rights of the Child.