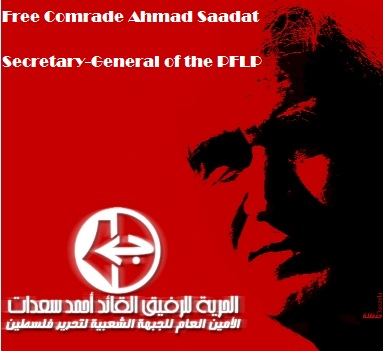 The Israeli High Court rejected, on Thursday, an appeal to remove the detained Secretary-General of the Popular Front for the Liberation of Palestine (PFLP), Ahmad Saadat, from his solitary confinement and claimed that he still instructs PFLP resistance fighters while in prison. The court approved a claim made by the Israeli Security devices stating that Saadat is still active with the armed wing of the PFLP and still gives instructions to the fighters of Abu Ali Mustafa Brigades.

The Abu Ali Mustafa Brigades was named after the former secretary-general of the PFLP who was assassinated by Israel when its air force fired missiles at his Ramallah office on August 27 2001.

The Israeli prosecution said it provided the court with “secret information that proves that Saadat is still directing the resistance fighters”. The so-called secret information was not even presented to the lawyer of Saadat.

Lea Tzemel, the lawyer representing Saadat, stated during the court session on Thursday that it remains unclear why he is still in solitary confinement, and added that should he wish to, he can easily create a revolution in Israel’s detention camps.

Tzemel added that the Israeli Intelligence did not provide any real information to prove that Saadat is still communicating with the resistance.

She stated that the only time Saadat communicated with the resistance was when he was imprisoned at the Jericho Prison monitored by European guards.

But the prosecution claimed that Saadat sent letters to what was described as “terrorists”, therefore he was moved to solitary confinement.

The court said that it is convinced Saadat is sending instructions to the resistance, and that his continued solitary confinement is important to maintain Israel’s security.

Tzemel said that Saadat was initially placed in solitary confinement after the resistance captured the Israeli soldier, Gilad Shalit, in the Gaza Strip in 2006. She also stated that what is happening now is an act of revenge.

It is worth mentioning that Israel is rejecting the inclusion of Saadat in any prisoner swap deal.

Israeli Prime Minister, Benjamin Netanyahu, stated two weeks ago that Saadat will never be released as long as he [Netanyahu] is in his post.

Israel claims that Saadat ordered the assassination of the then-Israeli Tourism Minister, Rehavam Zeevi, who was assassinated by PFLP fighters at a Jerusalem Hotel on October 17, 2001.

In 2002, Saadat was imprisoned at a Palestinian Prison, monitored by American and British observers in Jericho. The Israeli army invaded the Palestinian city on March 14, 2006, and kidnapped Saadat and several other political prisoners.

As instructed by Israel, the guards left the prison compound before the army surrounded it. Israel dubbed its offensive “Operation Bringing Home the Goods.”

It is worth mentioning that the Palestinian Supreme Court considered the imprisonment of Saadat at the Jericho prison as unconstitutional, but the Palestinian Authority kept him imprisoned until Israeli kidnapped him from the prison.

Amnesty International also considered the imprisonment of Saadat as illegal as he never received a fair trial, and that he was never accused of a crime and was never granted a due process.