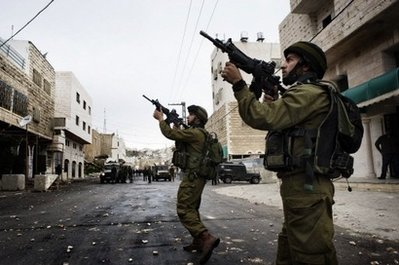 The Palestinian Center For Human Rights (PCHR), based in Gaza, issued its weekly report on the period between February 24 and March 3, revealing that the army killed one Palestinian, wounded 17, and kidnapped 50 residents.The center stated that the Israeli army shot and wounded seventeen Palestinians in the West Bank and the Gaza Strip, and that the soldiers continued to fire at farmers and workers in border areas in the Gaza Strip.

The PCHR added that the army carried out 18 invasions into Palestinian communities in the occupied West Bank and five in the impoverished and surrounded Gaza Strip.

During these attacks, troops kidnapped 50 Palestinians, including 10 children and three human rights activists in the West Bank, and raised 77 dunams of agricultural lands in the Gaza Strip.

The slain Palestinian was killed when Israeli soldiers, stationed at the border between the Gaza Strip and Israel opened fire at him. He was a resistance fighter who was present in the area along with a number of fighters.

1.5 million Palestinians in the Gaza Strip continue to be denied their basic rights, including freedom of movement, and their right to appropriate living conditions, work, health and education due to the illegal Israeli siege.

Raw construction materials and basic supplies remain off limits to the Gaza Strip due to the siege that was imposed by Israel over two and a half years.

Fuel supplies, except for limited amounts of cooking gas, were not allowed into the coastal region since December 10, 2008.

Furthermore, the army continued to use excessive force and violence against nonviolent protests against the Annexation Wall and settlement activities.

The Israeli army stormed the al-Aqsa Mosque in Jerusalem in order to allow a group of fundamentalist settlers to enter its yards.