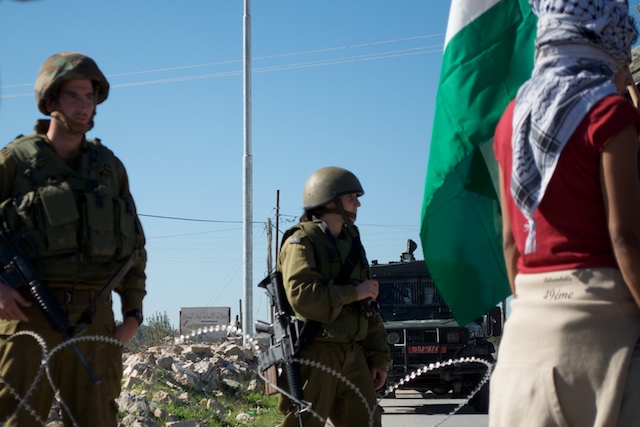 Following midday prayers, the villagers of al-Ma’sara marched, in their weekly tradition, towards the construction site of the separation wall, that annexes them from their farmlands.The villagers were joined by Israeli and international supporters, carrying banners and singing slogans calling for a peaceful end to the ongoing occupation. The march was also joined by a delegation from the Anti Apartheid Conference being held in Bethlehem, carrying a large banner calling for the boycott of Israel.

The barbed wire fence that prevents the protestors from reaching the construction site had been moved further towards the village, this week, and local sources also reported that the policy of placing troops on roof tops along the route of the protest continued.

Once the protesters reached the fence, speeches were given and some protesters sat in defiance of the blockade. The positioning of the fence, this week, blocked an access road to the village, and at one point had to moved to allow a truck to pass to leave the village. Despite calls from the protestors, the Israeli military would still not allow them to pass.

This week’s demonstration concluded without clashes or injuries.