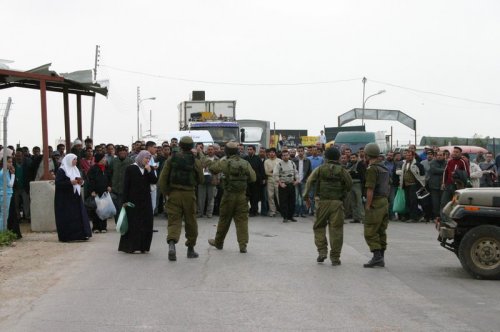 Israeli daily, Haaretz, reported on Monday at night that a Palestinian tractor driver was arrested by the army after fleeing the scene following an accident with two Israeli cars near a military post in the northern part of the West Bank.
The army said that the crash is likely an ordinary traffic accident and that two Israelis suffered light wounds. The army initially suspected the crash was an intended attack.

The tractor hit an Israeli vehicle pushing it to the side of the road, while another vehicle tried to avoid the crash by swerving away from the halted vehicle, and overturned into a ditch, Haaretz said.

The driver of the vehicle suffered mild wounds.

The tractor driver fled the scene and the army launched a search campaign to arrest him.

It is worth mentioning that two Israeli policemen were mildly injured in April of 2009 when a Palestinian bulldozer diver rammed their police vehicle into a bus.

The bulldozer driver was shot dead by an Israeli Taxi driver and the police.

A similar attack took place in July of 2008 when a bulldozer driver killed three Israelis in Jaffa Street in Jerusalem.

In the same month, 24 Israeli were wounded when a bulldozer driver carried out a similar attack in the city, Haaretz reported.

furthermore, Haaretz said that the Palestinian Authority in the West Bank managed to foil a suicide bombing that was planned to take place in Israel.

Last Saturday, six Palestinians children and their parents died of wounds suffered when a Palestinian Taxi was involved in a traffic accident with an Israeli Military Hummer vehicle.

The accident took place on Friday evening at the Silwad Bridge at the entrance of Ofer, near the central West Bank city of Ramallah.

The army said that the accident took place after “one of the tires of the speeding Taxi was ripped off leading the vehicle to swerve to the opposite side of the street where the military hummer was driving.