UN Chief To Be Allowed Into Gaza 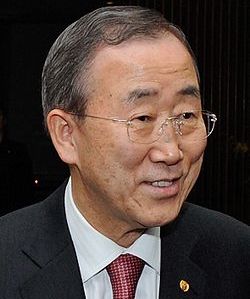 The Israeli Ministry of Foreign Affairs said that it would allow United Nations Secretary-General, Ban Ki-moon, and the EU High representative of Foreign Affairs, Catherine Ashton, into the Gaza Strip. The two officials intend to visit the coastal region to observe the humanitarian situation. They officially requested Israel to grant them entry into the besieged Gaza Strip.

The UN Chief is planning to visit the region by the end of March. He will also be participating in the Arab League summit in Libya, and will be pushing for the resumption of peace talks between Israel and the Palestinians.

Barak claimed that Israel is interested in easing the suffering of the Palestinians living under a deadly Israeli siege since 2007.

The United Nations has been urging Israel to allow the entry of construction materials to rebuild the coastal region heavily devastated by Israel during the war.

The Quartet Committee is expected to hold a meeting in Moscow on March 19, the UN chief is expected to participate in the meeting and would push for more efforts to resume successful indirect talks between Israel and the Palestinians.

U.S Secretary of State, Hilary Clinton, held a meeting with Barak last month and urged him to allow the entry of supplies into the Gaza Strip.

Meanwhile, a spokesperson of Catherine Ashton, said that she wants to visit the Gaza Strip and has been holding talks with Israel to facilitate this visit.

The spokesperson added that Israel gave a positive response to the request, yet, certain details regarding the visit and the final agenda need to be finalized.

Ashton will be visiting Israel next week, and is hoping to be allowed into the Gaza Strip as part of her tour which will include the Palestinian Authority in the West Bank, Jordan and Syria.