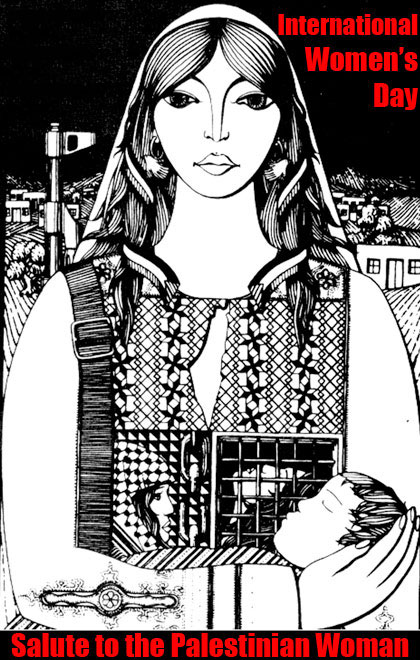 The Al-Mezan Center for Human Rights issued a statement today commemorating International Women’s Day, saying “This international occasion comes at a time when Palestinian women are confronting the most severe economic, social and political conditions they have faced since the start of the Israeli occupation of the Palestinian territories in 1967.”The rest of the statement by Al-Mezan follows:
The burdens of poverty and life under siege – in the Palestinian territories in general and in Gaza in particular – have fallen squarely on women’s shoulders. Women have had to take responsibility for their loved ones as tens of thousands of families have lost their main source of income. With severe job scarcity, women have been forced to work in harsh conditions and for extremely low wages.

Palestinian women are bearing the brunt of these difficult conditions, as has been the case for many years. Many women have been killed and detained. Their political and civil rights have been violated. They are deprived of their rights to free movement and security. The Israeli forces systematically violate women’s right, particularly their economic, social and cultural rights.

Different social views on the role of women in the society have increased women’s suffering. Some extremists view the role of women’s as only to reproduce, which clearly violates women’s rights and destroys their dignity.

Al Mezan Center for Human Rights congratulates women around the world on this occasion and pays tribute to the role of Palestinian women in the national struggle for freedom and independence, and their own struggle to realize their rights – which has yielded results. Al Mezan calls on women to increase their call for equality and reiterates its support for the struggle of women. Al Mezan will continue its efforts to combat any discrimination against women either their right to work, education, or enjoy public freedom.

Al Mezan asserts that the women’s success in achieving their rights and enhancing their equal position with the man form an important indicator to the rule of justice, equality and participation in any society.

Al Mezan calls upon the international community to provide protection for Palestinian women who are subject to ethnic discrimination committed by the Israeli occupation forces represented in the siege imposed on the Gaza Strip.

Al Mezan calls on the Ramallah and Gaza governments to protect women’s right and to ensure respect for their rights all the time. Al Mezan also calls on the Palestinian political parties and civil based organizations to support women activities and to involve women in their institutions.