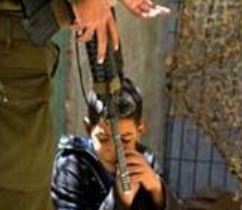 The Israeli Police kidnapped recently two brothers, ages 11 and 12, in Tal Romedia neighborhood, in the central of the southern West Bank city of Hebron.Local sources reported that the two children were identified as Ibrahim Abu Aisha, 11, and his brother, Sharif, 12.

They were heading back to their home located near the illegal Yishai settlement when settler children attacked them and broke a bird’s cage they carried. A settler child was wounded during the scuffle, Israeli sources reported.

The Israeli police rushed to the scene, kidnapped the two children and took them to an interrogation center in the city; no settlers were arrested.

On Monday, the Ofer Israeli Military Court near the central West Bank city of Ramallah, decided to release on parole Fadel Al Mohtasib, 12, from Hebron.

The child was kidnapped by the army and was detained for eight days after the soldiers claimed he hurled stones at them.

The Israeli prosecution did not file charges against the child yet while the Israeli court decided to try him as an adult.