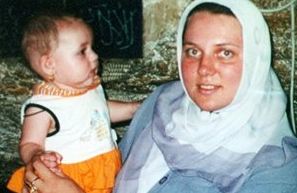 Palestinian Minister of Detainees, Issa Qaraqe’, stated that detainee Irena Sarahna from Ukraine, and married to a Palestinian from the Duheisha refugee camp in Bethlehem, was officially informed by the Israeli Authorities that she will be deported to her country within a month.She is currently imprisoned at the Hasharon Israeli prison for women, along with 34 female detainees including two who are below the age of 18.

The Palestinian Ministry of detainees filed an appeal at an Israeli court to void the decision as Sarahna is married to Ibrahim Sarahna, who is serving a life term at an Israeli prison, while their only child, Ghazala, 8, lives with her grandparents at the Duheisha refugee camp.

She appealed to be allowed to visit her husband, imprisoned at the Ramon prison, yet several similar requests, filed by the lawyer of the Palestinian Prison Society, Shereen Iraqi, were rejected although the Israeli law allow married prisoners to meet their spouses in person once every four months.

The Ministry of Detainees filed an urgent appeal demanded to allow Sarahna to visit her husband.

Qaraqe’ stated that the deportation of the detainees violates the international law and the basic principles of human rights.

Sarahna and her husband were kidnapped by the Israeli army on May 23 2002.

She was sentenced to 20 years while her husband and his two brothers, Khalid and Mousa, were sentenced to life-terms.