Soldiers Kidnap a 9-year-old Child And His Brother 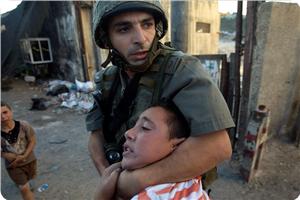 Local sources in Hebron, in the southern part of the West Bank, reported Thursday evening that Israeli soldiers kidnapped a 9-year-old child and his 20-year-old brother. Soldiers broke into the home of Nidal Al Owewy and kidnapped his sons, Sa’id, 20, and Ghandi, 9.

Army sources claimed that the two hurled stones at Abraham Avino illegal settlement outpost that is attached to their home in the Old City.

Local sources reported that the two children were identified as Ibrahim Abu Aisha, 11, and his brother, Sharif, 12.

An Israeli military court later decided to try the two as adults.

On Monday, the Ofer Israeli Military Court near the central West Bank city of Ramallah, decided to release on parole Fadel Al Mohtasib, 12, from Hebron.

The child was kidnapped by the army and was detained for eight days after the soldiers claimed he hurled stones at them.

The Israeli prosecution did not file charges against the child yet while the Israeli court decided to try him as an adult.