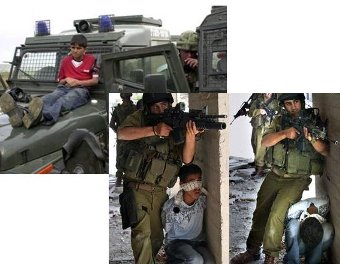 The Israeli Radio reported Thursday evening that the Israeli Military Prosecution revealed that one of the “elite” military forces used a Palestinian child as a human shield and forced him to open suspicious objects during the war on Gaza.The Radio said that the military prosecution filed charges against two soldiers of the Golani Brigade, accusing them of using civilians as human shields.

The incident in question took place in January of last year when the two soldiers forced a nine-year old child to open suspicious objects and packages. The incident took place in Tal Al Hawa, south of Gaza city.

Israel had to probe the incident in July on 2009 after the United Nations child protection commission confirmed the incident.

The incident is not an isolated issue as several reports by human rights groups, International, local and Israeli organizations, revealed that the army uses civilians, and in many cases children, as human shields when invading certain areas and breaking into homes.

AMNESTY International said that the army used children and elderly as human shields and forced them to inspect and open suspicious objects.

On October 5, 2005, the Israeli Supreme Court issued a final verdict barring the army from use Palestinian civilians as human shields.

The ruling was issued after the Legal Center for Arab Minority Rights in Israel, Adalah, filed a petition against using civilians as human shields as it constitutes a violation of the international humanitarian law.

Yet, such violations continued and the army did not refrain from this illegal practice.

In March 2006, a minor, aged 15 from Anabta in the West Bank was placed by the soldiers on the hood of their jeep after they tied by his wrists to the front metal windscreen to discourage Palestinian demonstrators from throwing stones at the jeeps, The Legal Center for Arab Minority Rights in Israel, Adalah reported.

In February 2007, again a minor, aged 15 from Nablus was used as a human shield.

Israeli soldiers removed him from his home and compelled him by gunpoint to walk in front of them. He was forced to enter the houses of relatives and neighbors, to open all of the doors for them, and later was asked to open all the closet and drawers and empty them, Adalah added.

The Use Of Palestinians As Human Shields