A Thousand Candles For Gaza 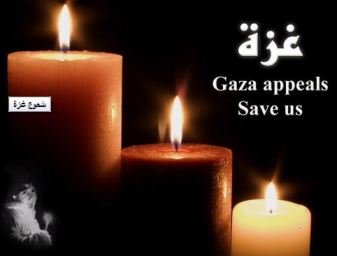 The Popular Committee Against The Siege on Gaza launched a series of event to mark 1000 days of Israeli siege and blockade on the coastal region. On Thursday the committee started lighting 1000 candles and held a peaceful protest near the Erez (Beit Hanoun) Crossing. Head of the Committee, Palestinian Legislator, Jamal El Khodary, said that the committee will continue its peaceful activities and protests in order to save the lives of 1.5 million Palestinians living under a deadly Israeli –led siege on Gaza.

‘1000 days of the blockade on Gaza, and in contrary people show steadfastness and patience, despite the Israeli repeated attempts to undermine this determination,’ El-Khodary stated.

‘The siege harmed the people, as well as the environment, health, the economy and social life. It constitutes a serious attempt to suffocate the people and break their will.

This siege targets children as 50% of them suffer from diseases such as anemia and malnutrition,’ El-Khodary told the reporters last Sunday, the Free Gaza Movement reported.

On Thursday evening, 1000 candles were lit and the children carried pictures of the victims of Israel’s war and siege.

Children of the Baladna center performed an play slamming the Israeli siege and calling for protecting the Palestinian children from oppression and aggression.

El Khodary stated that the Palestinian will never give up, and will never abandon their legitimate rights.

He saluted international organizations, popular movements, move and parliamentarian groups for their role in aiding the Palestinians in Gaza and for challenging the Israeli siege.

The Popular Committee Against the Siege Will be holding a protest next Sunday in front of the Erez terminal. Wounded and disabled Palestinians, activists and locals residents will be participating in the protest.