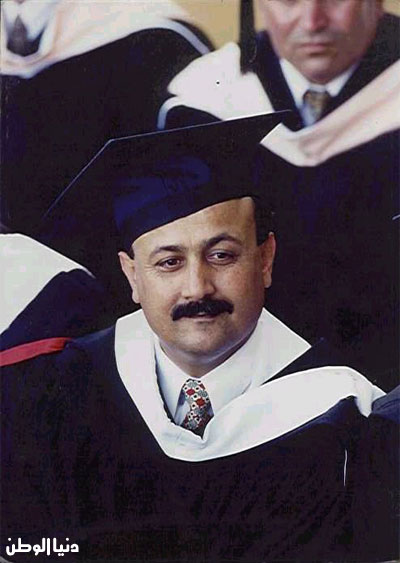 Imprisoned Fateh leader, Marwan Barghouthi, serving five consecutive life terms in Israeli prisons, obtained his PHD degree in Political Science.Israel kidnapped the Palestinian official, an elected legislator, and accused him of forming the Al Aqsa Brigades, the armed wing of Fateh, and held him responsible for the death of several Israelis.

Barghouthi, 50, joined the University of Cairo and the Arab Academy for Research and Studies in 1999, just three years before Israel arrested him.

His thesis “The Legislative and Political Performance of the Palestinian Legislative Council (PLC) and the Contribution of the PLC to the Democratic Process in Palestine in the period between 1996 and 2008.

His theses, 341 pages, will be presented to the Dead of the Arab Academy for Research and Studies, Ahmad Yousef.

The Jerusalem Post reported that Barghouthi managed to obtain the needed books and materials authorized by the Israeli Authorities.

It is worth mentioning that in 1980, Barghouthi managed to obtain his high school certificate while he was imprisoned by Israel. After completing school and being released Barghouthi obtained his B.A degree and masters from the Bir Zeit University near Ramallah.

The Fateh leader was brought in front of an Israeli court and was convicted on May 20, 2004.

Israel claimes that Barghouthi organized attacks that led to the death of 21 Israelis.

Barghouthi is a Palestinian leader who enjoys wide respect and support from the Palestinian people regardless of their political affiliation. He is seen as a symbol for resistance, determination and steadfastness.