On 7th anniversary of Rachel Corrie’s murder, Palestinian street named in her honor 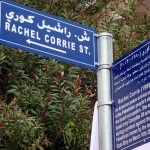 Commemorations were held in several places in the Palestinian Territories Tuesday, including a ceremony in Ramallah with Corrie’s parents to name a street in the slain activist’s honor, marking the seventh anniversary of her death at the hands of an Israeli soldier.The street-naming ceremony took place while Corrie’s parents were in Israel for the hearing of their lawsuit against the Israeli government for killing their daughter in 2003. Rachel Corrie was one of a group of activists with the International Solidarity Movement who were standing in front of a Palestinian home to prevent it from being demolished, when she was run over repeatedly by a US-made Israeli armored bulldozer and killed.

According to the International Solidarity Movement, “Approximately fifty Palestinians, Internationals and media then joined Craig and Cindy Corrie, Rachel’s parents, for the inauguration ceremony of Rachel Corrie Street in Ramallah. Speeches were delivered by both the Mayor and Governor of Ramallah, the Minister of State, National Parties’ Coordinator, an ISM activist and Rachel’s parents.”

In another of Tuesday’s commemorations of the killing of Rachel Corrie, in Tulkarem, students of Kafr Sur Secondary School, who have been working on a research project about Rachel’s life and death, today marked the anniversary with a march to a memorial stone at the entrance to the village. The students were joined by children from the nearby primary school, as the stone was unveiled and speeches were delivered by the headmaster, one of the students, and an ISM activist.

The International Solidarity Movement reported that at both events, speakers talked of the lasting impact left by Rachel, as an inspiration to those involved with the non-violent resistance in Palestine and across the world. Rachel’s mother spoke about how her daughter has become a symbol for the anti-Occupation movement, and of how grateful she and her family are to the Palestinians they have come to know and love over the past seven years. Cindy Corrie, Rachel’s mother, said the Palestinian people have continued to provide her family with unfailing support, despite the suffering they themselves continue to experience.